For every person infected, many others are affected—family members lose loved ones, children lose their parents, students lose teachers, employers lose key staff and scores of responders have witnessed extreme suffering and work in exceedingly stressful environments. 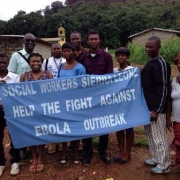 Who is addressing the social impacts of Ebola?

Fortunately, skilled social service workers are helping prevent the spread of the disease and addressing its wide-ranging social impacts.

Social service workers are those who contribute to the care, support, promotion of rights, and empowerment of vulnerable populations. All functional levels of this workforce have vital roles to play in West Africa’s Ebola response, including:

Social service workers are trained community mobilizers and trusted community members. They help to build awareness and combat myths about Ebola in an intense environment of fear and stigma. They recognize that stigma further isolates people and blocks access to care and support, which in turn contributes to the continued spread of the disease.

For example, social workers from the Ministry of Health and Social Welfare and nongovernmental organization staff in Liberia have been trained by the International Committee of the Red Cross and are carrying out awareness-raising and sensitization campaigns in communities, marketplaces, and homes. Others are organizing educational dramas, carrying out home visits, and staffing hotlines with responders trained in psychosocial support.

In Sierra Leone, Social Workers Sierra Leone is working among homeless youth in Freetown, a population not included in the government’s home-to-home Ebola education campaign during the country’s three-day lockdown. They also visited other marginalized communities that would otherwise not receive basic care and information.

And in neighboring Guinea, the International Federation of Red Cross and Red Crescent Societies is working with the Red Cross Society of Guinea, the Ministry of Health, World Health Organization, and Medecins Sans Frontiers to manage the epidemic, raise community awareness, and provide psychosocial support to affected families.

Social service workers also help to ensure that children made vulnerable by Ebola are protected from further harm. According to UNICEF, when parents die of Ebola, their children are sometimes found roaming the streets without parental care, proper shelter, health care, or nutrition. This can be a result of stigma and rejection, as the children are seen in their communities as sources of infection. Typical systems of care are interrupted and those who would typically take children in refuse to care for them due to fear of contamination.

Social service workers are part of a rapid child protection response including identification of and care for separated and unaccompanied children, family tracing and reunification. UNICEF is also supporting alternative forms of care such as safe or half-way homes staffed by social service workers. Community mobilization and sensitization campaigns also serve an important role in preventing family separation.

Ebola brings with it not only physical suffering for those infected, but also feelings of panic, shock, loss, grief, shame, suspicion, and anger to both victims and survivors. Increased challenges and stressors faced during such an emergency--such as food insecurity, loss of family income, interruptions in schooling and access to health care—make matters worse.

In Liberia, UNICEF is sending mental health specialists to Ebola treatment units and holding centers to provide psychosocial support to patients and their families.

The unsung heroes of the Ebola epidemic

Social service workers are some of the unsung heroes of the Ebola epidemic. They work around the clock to help prevent the spread of the disease and address its widespread social consequences. As more and more countries commit the support of their trained health professionals to treat an increasing number of patients, so too must we recognize the importance of social service workers and the many roles they are playing—from raising community awareness to providing social support to patients and survivors—in the midst of this epidemic. 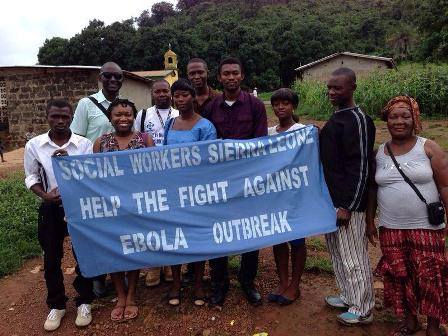