Celebrating the Role of Para Professional Workers in Children’s Lives 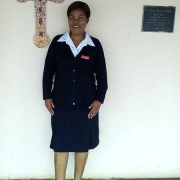 Blog by the Family Services Team at Cabrini Ministries Swaziland

In Honour of Universal Children's Day, we celebrate the work of paraprofessional staff who work with orphans and vulnerable children. For the past few decades, the faith-based organization of Cabrini Ministries in Swaziland has been working with most poor and vulnerable children, youth, and families in rural Swaziland, responding to issues related to HIV/AIDS and TB. Over the past five years, the organization’s response has taken into account not just the needs of the immediate community, but the region and the country as a whole as there has been an increasing need to further promote the welfare of children.

Zodwa Gama, a para professional case worker with the family services department of the organization, shares a bit about how she and the organization are helping vulnerable youth. Although her matrimonial home is in the city, Zodwa chooses to return to the area that she grew up in as a child week after week to work with the most poor and vulnerable in Swaziland’s Lubombo Lowveld. The rural lowveld has some of the highest rates of domestic violence, sexual abuse and poverty in the country.

Zodwa has stated that there tend to be misunderstandings about what a caseworker does, especially in the rural areas, but once her role is explained most people realize that they can get more from the organization than just healthcare services, OVC care and education support. She has worked over 10 years within the organization. Zodwa’s daily tasks as a para professional caseworker include visits to homesteads, conducting family-centered assessments, liaising with community partners and providing psychosocial support. The aspects that she loves about being a case worker is working with people and getting to know them individually.

Two years ago, Zodwa assisted by providing psychosocial support to a 10-year-old girl who had been raped. The perpetrator died before being arrested. She involved the mandated governmental partners in the case. As the case progressed, there were new discoveries of suspected physical abuse involving caregivers of the child. After meetings with the child, family members, and local government partners, the child was placed with her maternal step-relatives. While her situation and case was deemed as a success after months of monitoring the new placement, two years later the same child’s case was reopened after receiving a call from the local police that there was an issue of suspected child trafficking. Zodwa, in disbelief, met with the local authorities, the family and the child survivor as issues were being sorted through.

The local police took the lead on the case and Zodwa with the support of her team leader attended various family meetings. The child currently participates in individual and group counseling sessions from a professional counselor on the Family Services Team. Discussions are ongoing with the family about the safest long-term home, which is expected to be determined within the next month.

Zodwa believes that a person being respectful, being able to assist families with identifying their strengths and needs, not making false promises, and adhering to confidentiality are the most important skills needed by an effective case worker. Zodwa believes that the major result of her work and that of the department and the overall organization, is to bring back hope to children especially those who feel like they have no hope for a brighter future as a result of hardships they have faced.

Through grant funding over the recent years, the organization has been able to able to influence policy, participate in national dialogues, and assist with government capacity building regarding issues involving orphan and vulnerable children, child protection and children’s rights issues, cultural competency, and family strengthening service provision. Yet the majority still remains to be on-the-ground which often times can be challenging and even dangerous for psychosocial support field staff. Some of the staff are survivors themselves; in which cultural sensitivity and confidentiality is held in the highest esteem.

The work of Zodwa and Cabrini Ministries Swaziland is just of many, many examples worldwide of social service workers who are committed to helping vulnerable children and families thrive. On Universal Children’s Day, we say thank you to all of these workers for their continued commitment and efforts. The importance of case management and the ways the social service workforce helps families who have been affected by violence will be furthered featured in new materials and tools being released by the Alliance in January and February.

To learn more about the work of Cabrini Ministries Swaziland go to: http://www.cabriniministries.org/