By Sr. Margaret Kubanze, Secretary General, Association for the Religious in Uganda

As Uganda places a stronger emphasis on community-based, family-oriented care toward implementation of a national alternative care framework, the Catholic Care for Children in Uganda (CCCU) initiative is supporting training religious caregivers within care institutions. The purpose of this training is to support family reintegration, prevent future family separation and ultimately end institutionalization within Uganda.

CCCU is an initiative of the Association of Religious in Uganda and financially supported by GHR Foundation in Minneapolis, USA. The program goal is to strengthen Religious Institutes in becoming champions of child care reform and improving outcomes for children living outside of family care. For a smooth and effective community-oriented paradigm shift to community-based care for children, the CCCU program was launched in 2016.

The program is currently working with 17 Religious Institutes operating 46 child care institutions (CCIs) with 1,773 children. Children enter the institutions largely due to family poverty and the mentality that children will have greater access to nutrition and education in institutions rather than remaining with their families. These families don’t understand the negative results of sending their children away to be raised outside of a family.

The program is being implemented in three phases, from 2016-2021. The program began with a rapid assessment to determine the skills and qualifications of those running the institutions. A second assessment was undertaken to determine the extent to which the legal frameworks for child protection are being implemented. Both studies revealed a need for greater training and education for staff, as well as increased awareness on the negative impacts of institutionalization. 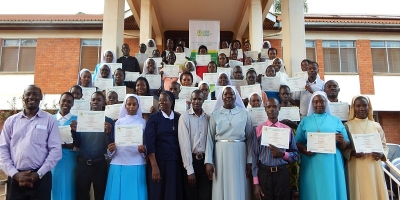 To build the capacity of staff, 80 scholarships were awarded for education in social work and social administration. A total of 46 staff, one per institution, obtained a bachelor’s degree in social work, and an additional 17 staff are continuing to work toward a master’s degree in social work. Additionally, 176 Religious staff members were trained in a certificate course on protection of children that included learning about the alternative care framework and implementing effective case management practices. The trainings were conducted by professors in the Department of Social Work at Makerere University in partnership with the Ministry of Gender, Labour and Social Development.

Phase IIis a two-year phase, from 2018-2019, that aims to ensure the 46 Catholic Care Institutions are exceeding the new standards set by the government for operating child care institutions. The program will support a few CCIs as a pilot to transition children to community/family-based care in preparation for mass program rollout in Phase III, which is expected to begin in 2021 and will support all 46 CCIs to align their work with the Alternative Care Framework and transition entirely to community- and family-based care.

The Children Act, passed in 1997, is the overarching legal framework for the welfare and protection of children in Uganda. An amendment bill was passed in April 2016, and includes significant changes in the legal environment for the care of orphans and other vulnerable children. In addition to broadening of the definition of children’s rights and violence against children, there is a stronger emphasis on community-based, family-oriented care.

This includes development of a stricter Alternative Care Framework that specifies a continuum of care and mandates that institutionalization must be a last resort. The framework defines six core care options in preference: (1) family reunification, (2) kinship and community care, (3) domestic adoption; (4) foster care; (5) inter-country adoption and; (6) specialized institutional care. A Deinstitutionalization Plan is also being developed and includes empirical evidence on the negative impacts of institutional care on the overall development of children, the increasing abuse and exploitation of children in child care institutions including child trafficking, and the higher costs associated with institutional care (Carter, 2005, and Walakira et al, 2014). If implemented, the plan will result in resettlement of approximately 64% of children currently in institutional care. The rules and regulations for approved homes were been revised in 2013 and made more stringent as far as approval and minimum standards for child care institutions are concerned. Legal liability is placed on individuals and organisations operating unapproved homes.

Implementation of the framework and deinstitutionalization plan will result in immediately halting approval of institutions while a systematic assessment of existing ones is conducted, subsequently resulting in closure and more strict inspection of child care institutions by government.

In anticipation of this and based on the principal law’s highlight on family-based care, these strategies are already being adopted and implemented into the current work of Catholic sisters and brothers caring for orphans and other vulnerable children. Catholic Care for Children in Uganda believes strong gatekeeping mechanisms blended with effective case management practices, skills that are being developed through social work studies, will prevent unnecessary admission of children into instructional care and prevent the prolonged, unnecessary stay of children in CCIs. This will not only contribute to de-institutionalization efforts in Uganda but also promote child protection by ensuring that every child is entitled to enjoyment of parental care and protection that is free of abuse, violence, exploitation and neglect.