After Thembi’s* parents passed away from an illness when she was in Grade 11, she and her brother, in Grade 8 at the time, moved in with their grandmother. It was not an easy transition for any of them.

The grandmother did not work; in fact, she was old enough to be dependent upon government grants for the elderly. The money was not adequate for her to cope with the sudden growth in the household and with the needs of two growing school-aged children. She was not able to afford the children’s school uniforms and other material needs. They were struggling, with no means to access what was needed to steer them out of their bleak reality. The highly stressful situation impacted the grandmother’s health; she developed a high-blood pressure condition.

Unfortunately, the story is not uncommon in the many granny-headed families in South Africa. If the parents pass away, there is oftentimes no financial, material or psychosocial support for the children. Sometimes proper identification is not available. Who helps vulnerable children to respond to these crises?

In 2010, Lungi, an Isibindi Child and Youth Care Worker (CYCW) intervened. She explained the program, its purpose and services to the grandmother. Developed and implemented by the National Association of Child Care Workers (NACCW), the Isibindi program is serving more than 180,000 orphans, at-risk or vulnerable children throughout South Africa. Each worker aids up to 48 children, monitoring a child’s progress, acting as their confident and providing support in any areas as needed in a child’s life. CYCWs build relationships with children through interaction in typical daily routines- cooking together, reading, household chores and life skills.

The grandmother was both pleased and relieved to be immediately registered in the program and receive additional support for herself as well as the children. The CYCW assisted the family in applying to the Department of Social Development for a foster grant. She also helped with Christmas gifts during that first, difficult year. Over time, this new, blended family was able to begin saving money toward future schooling.

Lungi saw the need for grief counseling to help the family cope with their losses. In addition, life-space counselling played a big role in teaching the family to communicate and develop routines for sharing responsibility for household chores and they were taught effective behavior management skills to strengthen their family. Lungi also encouraged and supported the family to grow a food garden; this project was a great success and was even formally approved by the Department of Agriculture.

The CYCW also arranged for the children to participate in the city’s soup kitchen breakfasts and lunches. With a full belly, the children were better able to concentrate on their school work. She also participated in regular school visits and helped with homework. 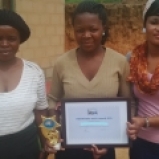 Thembi completed her schooling in 2011; then her CYCW advocated successfully for funds to enable her to further her education. She was accepted into the Human Resources program at at local college in 2012. Following graduation, in 2014, Lungi further encouraged Thembi to apply for a CYCW post. She was selected for the job in this exciting new initiative – once an at-risk youth herself, she had now graduated to become a service provider to others facing difficult situations.

“The skills that are important to me as a CYCW are observation, communication, listening and facilitation,” said Thembi. “My relationship with Lungi means a lot. She taught me the importance of education and loving life. She is an important role model to me.”

Meaning “courage” in IsiZulu, the Isibindi program is in the second year of a five-year scale up and is being funded by PEPFAR through USAID. With a goal of training 10,000 CYCWs, to date 4,402 CYCWs have been trained.

Read Part 2 of Thembi's story next month. Her story will be posted as a blog and included in the December member e-update.