The world’s attention has been focused on the tragedy unfolding for millions of Syrians, as they are forced to leave their homes and risk their lives in an effort to cross seas and borders to find safety. Also tragic is the total number of 60 million individuals who are currently forcibly displaced worldwide and live as refugees, asylum-seekers and internally displaced persons. This number has steadily increased over the past four years as a result of persecution, war and human rights violations. The length of time a person spends displaced averages 17 years worldwide. Displacement has immediate and long-lasting social, emotional and economic impacts.

At times like these, the social service sector plays an important role in helping individuals and families rebuild their lives. Several recent events featured the important work of social workers who work alongside refugees and migrants to affect policy, design programs and address the psychosocial effects of displacement. 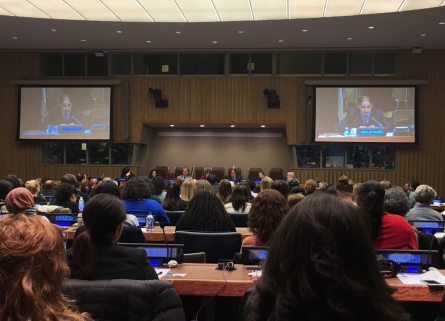 Social Work Day at the UN

On April 4 I had the opportunity to participate in the 33rd Annual Social Work Day at the UN under the theme of Refugees and Displaced Persons: Ensuring Dignity and Worth. Organized by the International Federation of Social Workers (IFSW) and the International Association of Schools of Social Work (IASSW), the event brought together 700 social work practitioners, academics and students as well as representatives from NGOs and UN agencies.

The event recognized the important roles social workers play, both as policy advocates and direct service providers, when working with refugees and migrants. Guglielimo Schinina, Head of Mental Health, Psychosocial Response and Intercultural Communications for the International Organization for Migration, stated that social workers have a fundamental role in defining the underlying causes and the consequences of migration and need to focus on policy issues as well as provision of social services. Both he and Ninette Kelly, Director of the New York Office of the UN Office of the High Commissioner, also emphasized the importance of providing psychosocial support to those who have been displaced, using a strengths-based perspective that builds on resilience, is forward-looking and sees the person beyond the category they represent.

This year’s World Social Work Day also saw several events dedicated to the issue of refugees and migrants. Held on the third Tuesday of March, World Social Work Day is an opportunity for the profession to express international solidarity and bring messages to governments, regional bodies and our communities. On March 15, social workers and others in the social service workforce held events to celebrate the theme “Promoting the Dignity and Worth of Peoples.”

IFSW organized two high-level events to bring together professionals working in the social service sector to discuss and strengthen collaboration in responding to the refugee crisis that remains ongoing in Europe.

The Social Work Symposium in Vienna, “Responding to the Refugee Crisis,” was co-organized with the Austrian Association of Social Work, YOUNION and the Chamber of Labor, Austria. It brought together social workers from 25 countries of departure, transition and resettlement or asylum, from Syria to Sweden. The event was also webcast for others to view and participate.

The goals of the Symposium were to: 1) create an overall working plan for social workers in each of the affected countries to coordinate information that provides a better understanding and response to refugee needs; 2) develop a focused strategy on particular vulnerable groups such as unaccompanied children and young people, older people, those with health issues and trafficked persons; 3) establish a comprehensive political advocacy strategy; 4) establish social work models that support refugees in isolated situations where other forms of assistance are not available; and 5) utilize the skills of social workers constructively to develop inclusive and cohesive societies.

Dunja Gharwal, a social worker in Austria, shared her experiences assisting families in the main train station in Vienna and at a nearby refugee camp. “We were allowed two days to conduct a survey to determine needed services. People asked for psychosocial support, but the most common question was where they could get water.” There were also 1,500+ unaccompanied children in need of a myriad of services. “Social work as a profession is based on human rights,” she said. By collaborating, we strengthen “our approach to human rights at the micro, mezzo and macro levels.”

Rory Truell, IFSW Secretary-General, announced that “This is a great example on World Social Work Day of the kind of work that we do. We’re going to strengthen our capacity to articulate a stronger social work voice that we hope the politicians will follow.” 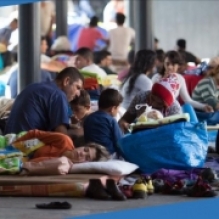 The event concluded with the release of a Common Statement. “On this World Social Work Day, professional social workers (educators, practitioners, researchers, advocates) pledge to: Work to uphold the dignity of all those refugees and asylum seekers who have been forced to leave their homes…and integrate the learnings from practice in social work curricula across the globe so that the new social work workforce is oriented with adequate knowledge, skills and attitudes for working with migrants, refugees and asylum seekers in different contexts. We commit ourselves to: Work in partnership with all other agencies and professional groups to maximize results and we hope that this grass-roots/ ground- up initiative will act as a catalyst for governments to work with us.”

In timing with World Social Work Day, The Guardian also wrote on the developing role of social workers in responding to the refugee crisis. “As more people settle for the longer term, social work will be crucial in integrating communities and helping people come to terms with what they’ve been through.” Gabriele Stark-Angermeier, deputy chief executive of the Munich branch of the welfare organization Caritas, said, “The emotional trauma of change is something that social workers know a huge amount about. But I think there’s also a huge learning curve for social workers in understanding the massive journeys that people are making and the situation they have come from.”

Many resources exist for social workers interested in learning more about work with refugees. The National Association of Social Workers US (NASW) Policy Statement on Immigrants and Refugees provides background on the situation as well as policy recommendations. The IFSW Policy Statement on Refugees includes information on the role of social workers. Resources on the UNHCR website provide data and updates on refugee situations around the globe. InterAction has compiled fact sheets and created a map and other resources specific to Syrian refugees. If you have more resources or information to add, please do so in the blog comments section below.