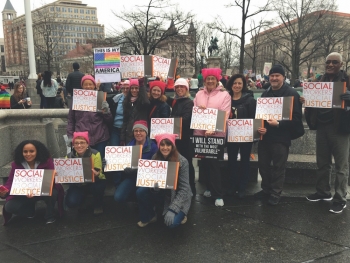 As we celebrate and mark International Women’s Day, one must also consider and reflect upon the best ways to advocate for women’s issues globally. Social workers are a natural fit for organizing. Social workers have long organized to improve living and working conditions. One such renowned social worker and women’s rights advocate is Jane Addams, who worked in Chicago, Illinois, through the settlement house movement in America to promote social and economic reform. In the US, the National Association of Social Workers (NASW) supports women’s rights. One of the bylaws-mandated committees of the association is the National Committee on Women’s Issues. They are tasked with developing, reviewing and monitoring programs of the Association that significantly affect women.

The NASW Code of Ethics calls on social workers to be engaged in social and political action. “Social workers should be aware of the impact of the political arena on practice and should advocate for changes in policy and legislation to improve social conditions in order to meet basic human needs and promote social justice.”[1]

I have worked at NASW since 2003. One of my first projects was to organize social workers for the March for Women’s Lives in April of 2004. It was an amazing experience. I worked with staff across the association to bring together hundreds of social workers to march in support of reproductive choice. We had social work staff and other professional staff working together to mobilize our members.

In January, hundreds of social workers, both women and men, joined NASW to participate in the Women’s March on Washington in Washington, DC, and across the country. The reasons for marching were varied, but at one level people marched to show that women’s voices matter and that government leaders should put women’s issues at the forefront of the political agenda.

The energy for the March was electric. NASW set up a platform for individuals to sign up for the March. The platform allowed for 500 registrants, and we surpassed that total a week before the March. NASW chapters organized social workers to march in their states and some even organized buses to travel to Washington, DC. They joined an estimated 500,000 marchers.

We had marchers at the Washington, DC event from as far as California and Oregon and as close as DC.

The Women’s March on Washington had an international reach. There were at least 673 marches held on the same date around the world. Our voices were heard.

You may ask what happens after marching. Well, marching is a critical organizing tool. It helps bring people together and allows us to stay connected with them. After the March, we sent an email to people who signed up to march and invited them to join the NASW Advocacy Listserv. The Listserv helps individuals send letters to their members of Congress on key legislative issues. We have also connected individuals to their local chapters to help continue the work of organizing for social change.

Social workers can be involved in social change efforts with clients, in their communities, in their country and across the world. One way to do this is to join an association or organization that promotes change efforts you believe in. Associations and organizations often have ways to engage their members to influence change. You can also contact your representative body in your nation to educate them about social work and the work that you do. You can become an expert resource for your elected officials. You may want to attend town hall meetings that your representatives host. You can write letters to the editor of your local or national news outlets. See NASW’s Advocacy Resources here.

The main thing is to stay engaged and let your voice be heard. Social workers are experts in individual, group and community interactions. We can help bridge the gap between elected officials and the clients that we serve.

NASW is the largest membership organization of professional social workers in the United States, with 132,000 members. NASW works to enhance the professional growth and development of its members, to create and maintain professional standards, and to advance sound social policies. We serve our members through our National Office and 55 Chapters.