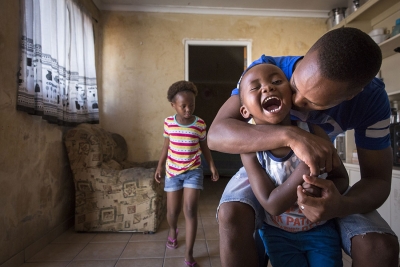 Involvement of fathers in caring for infants and children benefits not only children, but also mothers and fathers[1]. To strengthen father and other male caregivers’ positive role in children’s lives, the Men Care South Africa program was launched in 2015. Since then, more than 350 social workers and 190 child and youth care workers have been trained and supported to implement the program.

“I have seen the MenCare program change men in my community,” said Simah Dhlini, a 35-year-old trained as a child and youth care worker conducting parenting training for men through the program.

From the Eastern Cape in South Africa, Simah progressed in her career as a CYCW in 2006 to become a facilitator for youth empowerment and early education programs. She is a part of the Isibindi program that is administered by the National Association of Child Care Workers. Born in a family of five, she grew up with her two sisters and two brothers and her siblings’ many children in a two-room house. In 2006 she became a Child and Youth Care Worker in Eastern Cape and progressed in her career to become a facilitator for the Youth Empowerment program in 2013 and the ECD program in 2016.

Initiated in South Africa in response to the HIV epidemic, which left many children orphaned or vulnerable, Isibindi is a community-based program that strengthens families and helps to protect children from abuse, neglect and violence. Endorsed by the Government, Isibindi focuses on the psychosocial well-being of children and adolescents by supporting positive caregiving in the most disadvantaged households and assisting families to access key services. Child and Youth Care Workers are drawn from unemployed members of the community and receive accredited training to deliver home visits, work in Safe Parks, and offer parenting and youth empowerment programs to vulnerable children and their families. One of the challenges identified by CYCWs in their daily work was how to more effectively engage fathers and other male caregivers in efforts to care and protect children. Due to migration, the legacy of Apartheid, the impact of HIV and AIDS, delayed marriage and GBV, South Africa has one of the highest rates of absent fathers, with only 37% of children living with their biological fathers. This situation, together with cultural perceptions that child care is the ‘woman’s responsibility’, fathers and other male caregivers too often have a limited role in their children’s lives.

The MenCare South Africa program was created and launched in 2015 to strengthen the involvement of men as fathers and as caregivers. A partnership of Sonke Gender Justice, UNICEF and NACCW, the program consists of 12 sessions that help to strengthen the relationship between children and their male caregivers by increasing men’s active involvement in childrearing and promoting gender equality and nonviolent parenting practices. Evaluations have shown a number of benefits of the program on participants, including more equal division of caregiving between men and women.

In 2017, Simah was one of the 190 Child and Youth Care Workers trained on the MENCARE program. The program provided her with confidence and skills to engage with the young men. It helped to change her own attitudes and beliefs regarding men and child care. For instance, Simah previously feared working with men, because of the generally higher social position that men hold compared to women. Through the MenCare program, she learned what questions to ask and how to approach the opposite sex. In addition, the program helped her understand that although traditionally men are not encouraged to express their emotions, men oftentimes have deep-rooted feelings from how they were raised as children that impact their attitudes and behaviours once they themselves become fathers.

The initial feedback from participants indicated a range of benefits of the program: men felt valued, appreciated and listened to, it provided the opportunity for the men to share experiences and allowed fathers to express their emotions, contributing to changing gender stereotypes. In addition, the program provided an opportunity for fathers and other male caregivers to explore intergenerational transmission of parenting practices: fathers discussed the impact of their experiences as children on both their life and their parenting beliefs and practices, including a sense of being neglected by their own fathers. Participants understanding of the importance of fathers being involved in childcare increased, as did their practical knowledge on issues such as changing nappies, helping in the household, supporting their partners during pregnancy, being more active in family routines and establishing the baby-father bond with very young children. The program also had a ripple effect, with participants becoming change agents in their communities. Concrete actions included male carers wanting to create structured committees to fight violence in their community and becoming advocates in their communities for men’s involvement in parenting.

The transformative impact of the MenCare program is illustrated through the story of one of the participants in Simah’s sessions - Tshepo. Tshepo is a 29 year-old man who grew up living with his mother and three brothers and did not know his father. He dropped out of school in 2007 while in Grade 11 in order to look after his sick mother and younger brother. In October 2016 his mother passed away and he then also lost his younger brother in August 2017. He has two children who are currently living with his girlfriend Gloria, 7 year-old Ayanda and 4 year-old Martin. When he joined the program, he was feeling hopeless and did not want to speak about his past. Through the program, he realised that his feelings of anger and sadness about his past – being abandoned by his father, the death of his mother and brother, and his responsibilities to care for his two ill brothers – were negatively impacting his relationship with his own children. For the first time, he opened up about his feelings of his past and present situation. He began to let go of the past situation and began to build a better relationship with his children and take responsibility for them. He also began job seeking in order to support his brothers and his children.

Tshepo is now an advocate to other men in his community for increased involvement in child care and stopping abuse of children and women. He has organized events to address a local soccer team, spoke at community meetings during Child Protection Week, and volunteered and mentored young men in youth empowerment programs in Safe Parks and school camps.  Sharing the knowledge and motivation he gained through MenCare, he works tirelessly in his community to help young men understand to the importance of taking care of their family and helps them to be good fathers or male caregivers.

"The Men care program has played a huge role in bringing about change in myself but also my community at large. I see things differently now, and as a man, I am a better partner, father and man. Isibindi brought a program that is different and that helped remove the heavy load that has been on my shoulders for many years." - Tshepo