Home
>
Resources
>
Blog
>
A new start for children off the streets

A new start for children off the streets

UNICEF is working with the Congolese government to create a protective environment and to ensure the safety of the most vulnerable children. 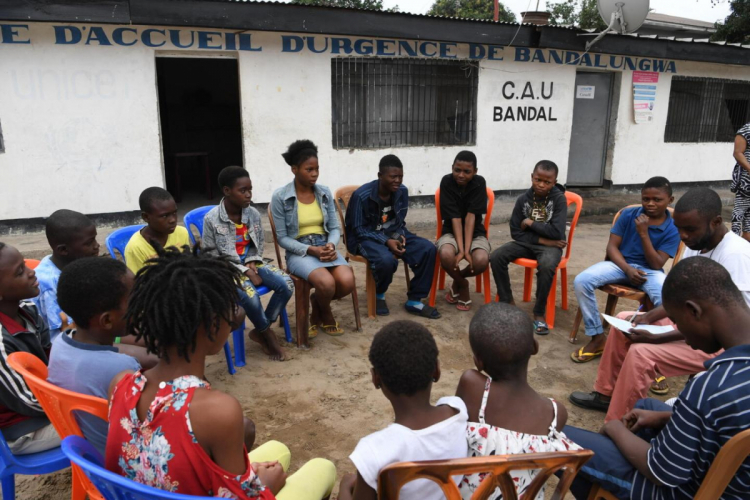 At an emergency center in Bandalungwa, around twenty children form a circle around their supervisor and discuss good practices for living in a community. These children have different stories and yet are very similar to one another because the majority of them lived on the streets of Kinshasa only a few days ago.

Ketia, 16 years old, lived in the street for a year with her mother before her mother passed away. The young girl thus found herself alone in the street, confronted on a daily basis by abuse and violence that led to pregnancy. It was children who were previously homeless, who had trained to be para social workers, who found her and guided her to health services.

At the center, children are provided shelter away from the streets and from mistreatment for a month. They are then either reunified with their families, placed in foster families, or lodged in accommodation centres for an indeterminate duration. According to their needs and ambitions, all the children are encouraged to undertake education or begin professional training.

Intending to help support the needs of his family, Richard left the city of Tshikapa at the age of 12 to find work in Kinshasa. Alone, the young boy was quickly subject to economic exploitation in the capital. Following a family tracing process, Richard will be reunited with his parents in Tshikapa and will continue to be accompanied by para social workers there.

UNICEF accompanies the Ministry of Social Affairs, Humanitarian Action and National Solidarity to establish child protection mechanisms. Last year, two welcome centers were set up in Kinshasa and more than 3,000 children were welcomed there thanks to the support of the Canadian government.