Preventing and Addressing Violence Against Children: The important role of the community level worker

Orphaned as a child in a community heavily affected by HIV/AIDS, Doreen was defiled and became pregnant at 15, but she was determined to stay in school. She dropped out when students and school authorities shunned and stigmatized her, but with support from a community social worker, Doreen returned to school. The social worker advocated on Doreen’s behalf, lobbying and sensitizing parents, teachers and students. Doreen is one of the few girls who have returned to school after having a child.

Strategies to address violence, such as those outlined by THRIVES, reflect available evidence to help countries sharpen their focus on violence prevention priorities. UNICEF’s #Endviolence campaign has helped to foster global consensus that violence against children is unacceptable, and has also promoted strategies to prevent and respond to violence.

In Uganda, an estimated 25% of teenage girls are sexually abused, resulting in child motherhood and a high risk of HIV/AIDS and other sexually-transmitted infections (Uganda National Household Survey 2012/13). In addition, 38% of children experience violence at home and 32% at school. The evidence shows that children and adolescents in Uganda continue to face sexual exploitation, early marriages, human trafficking, drug and substance abuse, involvement in social unrest, and engaging in criminal activities.

We ask is enough being done to respond to the child protection needs of children affected by violence?

Protecting children from violence: the need to work together

Through our experience of supporting children in Uganda, we take a look at the role of community action in this area.

Grace Mukakimenyi is a government community development worker in the sub-county of Katikamu in Luwero district, Uganda. Through a process of community mapping, the most critically vulnerable families were identified in Grace’s area. This data was collected as part of the International HIV/AIDS Alliance-led, USAID funded, SUNRISE-OVC project which worked with local government and communities to improve services for children. Grace says, “Before SUNRISE, we didn’t know whether we were providing the right services to the right people.”

The role of community level workers

When it comes to integrating services, community workers play an essential role in creating demand for other services.

In the context of task-shifting, the concept of using community members to deliver certain basic health and social welfare services to their communities has gained currency. In 2013, the International HIV/AIDS Alliance conducted a systematic literature review of the role of volunteer community health workers in HIV care in sub-Saharan Africa. The study found that these workers clearly contributed to HIV service delivery and to strengthening the human resource capacity in their communities.

Evidence of the crucial role community level workers can play in preventing and addressing violence against children has been demonstrated by a five-year, USAID-PEPFAR funded project working with orphans and other vulnerable children (OVC) in Uganda.

The training of an army of 11,700 para professional social workers has been instrumental in supporting local government staff to identify vulnerable families, making first contact and referring them to services. 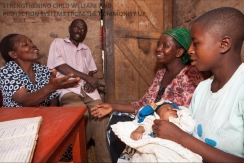 All the para social workers are community volunteers. They were already part of informal community groups such as village health teams and community development committees; others were local religious leaders or members of people living with HIV or adult literacy groups and therefore already active in the community. They received training in child protection, community mobilization, child abuse identification and reporting procedures, advocacy and data collection, using government and UNICEF developed curriculum.

Community para social workers conduct home visits to OVC families to ensure that children are in school and link families to more formal social service providers to support their well-being. Doreen, a 17-year-old mother and student, is an example of how the project has made a difference among Uganda’s youth.

Over 1 million children have benefited indirectly but all vulnerable children and families gain from a strengthened government and community systems. As USAID’s Mission Director Leslie Reed said, “When the child social welfare and protection system is functioning effectively, families and children have access to an array of quality services that promote wellness and protect them from harm.”

Para professionals are consistently identifying vulnerable families, providing first level response and referring them to services and to sub-county Community Development Officers. The system of identifying, responding and referring means an increase in preventing, responding and protecting OVC against abuse, neglect, violence and exploitation. These volunteers provide critical links between families and government services. Evidence from 43 of the districts in which SUNRISE-OVC operated indicate the majority (79%) saw a decrease in the number of orphans and other vulnerable children experiencing abuse between 2011 and 2014.

Through the work of community para social workers, the community has increased its understanding of child protection through community dialogue, and local government staff have increased their capacity at community level.

The impact of SUNRISE-OVC provides further evidence that a commitment to community systems strengthening including community level workers – which lies at the heart of growing movements such as the 1mCHW Campaign – must be adopted by those programming for vulnerable, hard to reach groups.

On this second day of Social Service Workforce Week, we are featuring worker profiles that display the skills and dedication that community level workers bring to addressing child protection issues. Please take some time to read these worker profiles on our website:

Please take a look at this SUNRISE-OVC project memoir.

Read this blog posted on the Global Social Service Workforce Alliance website by Kate Iorpenda, Senior Advisor on Children and Impact Mitigation, following her trip to Uganda to see the work of the SUNRISE-OVC project.

Take a few minutes to watch this video produced by CRS on addressing violence against children in Malawi.

Do you have more examples? Join the conversation and tweet them using #SSWWeek or send them to us via email and the Alliance will help to promote your work.

Congrats to the Global Social Service Workforce Alliance for flagging this key issue: GBV is predominantly about caring for someone after the violence has taken place (instead of prevention).  And it is predominantly focussed on adult women with some programmes on adult men.  Yet few programmes look at prevention and in young people of both genders.REPSSI is currently spearheading a programme in Malawi looking at a three pronged approach to prevention in children.  Young, primary school aged girls, recieve an intervention geared towards improved self efficacy, self defences and SRH knowledge.  At the same time, young, primary school aged boys, attend sessions that look at challenging cultural norms around violence.  Follwoing their 11 individual sessions, the two groups of young people gather with adult staeholders to go explore how to make their community safer. REPSSI is piloting this work in 9 primary schools in Malawi (3 urban, 6 rural).  Baseline data showed that exposure to violence was very present.  One quarter had ever been punched or hit on the head; 10% reported this happening in the past week.   Over 10% of students reported their parents shouting at each other at least once a week.  Of those students who had a male and female caregiver present in their household, 17% had seen the male shouting at the female caregiver in the past week, as well as the male coming home drunk, with 8% reporting they had witnessed the male caregiver beat up someone else.This exposure to violence continued from the home to the school, where close to two in five students reported being beaten at school in the past month; 18% of them reported being beaten at least once a week. It seems that students felt less safe at school and in their communities.  Whereas 9% reported feeling unsafe at home, double that (18%) reported not feeling safe going to the store, and one quarter (26%) reported not feeling safe going to the school toilets (note that this is similar to the data coming from the MPES baseline survey). Just over 10% reported not feeling safe walking to and from school.Students were administered a mental health screening tool to assess their mental health.  Mental health was assessed using the Shona Symptom Questionnaire, a 14 item tool developed and validated in Zimbabwe.   Just under one in five students (185) scored 8 or above on the scale, indicating poor mental health; 4% reported suicidal feelings.  Students who had lost their mother  (29% vs. 18%) and children who had seen violence (29% vs. 17%0 were more likely to report poor mental health.Stay tuned: our final data is undergoing analysis as I write this! :)

Thanks for sharing your findings,Lisa.My question is based on the 4 % sucidal finding in the research,are there intervations being planned to address the issue in that community/school?

Preventing and Addressing Violence Against Children: The import

Dear ColleguesI here in wish to express my disatiesfaction about my new case when  a biological father abuses his daughter because she did not report when she went for a night out.She is 11 year old very smart and does alll the silly things her peers do.The grand mother was at the clinic today with a disable child.She is over 65 by age.Things like this make my body sweats with fustration as I attend each family with diverse needs.But  we are mostly affected by fact that I dont work on myself I have a team of 18 trainees in this field. Please help us were possible to make this work we often need financial resource to travel with each family to places like Police Station to lay charges but we fail our communities. I hope and trust you will find our request in order. bonganichild and youth worker

I am happy to see programmes

I am happy to see programmes that are developed at Tanzanai to address the need. it shows that they have a great plan in creating a violence free generation. we will continue promoting and upholding the rights of young people.